In March 2016, an AI-based computer program, AlphaGo, beat a world champion, Lee Sedol, in the ancient game of Go. This was a milestone of sorts, and more eventful than the defeat of Gary Kasporov at the hands of IBM’s DeepBlue in 1997. Go is a lot more complex than Chess, with 10130 more possible moves vs chess[i]. This means that a rule-based system would have difficulty scanning all possible responses for an optimal one. AlphaGo was based on a form of “Artificial Intelligence”[ii].
Since then, businesses have rushed to claim their expertise in artificial intelligence (AI) or the advances they expect to see in the near future. In fact, the mention of the phrase “artificial intelligence” during quarterly earnings calls has grown three times[iii] over the last year. A number of businesses connected to AI have seen their stocks dramatically increase in value (Nvidia and Advanced Micro Devices are a case in point).
Is this the fourth industrial revolution?
Deep learning is the ability of a computer program to gain an abstract level of knowledge from churning through a lot of data and eventually apply it in new situations. The computers are not explicitly programmed to follow a rule – the program can use its abstract understanding to take decisions when faced with new situations. While AI concepts have been around since the middle of last century, the easy availability of massive amounts of data and computing power has enabled resurgence in this field again. Andrew Ng’s famous paper in deep learning describes the setup that puts some of these numbers in perspective. To be able to correctly identify a cat in YouTube videos, it took 10million images, 1000 machines (16,000 cores) and 3 days to train the algorithm.
Exhibit 1: Timeline of Artificial Intelligence Technologies (Source: NVIDIA) 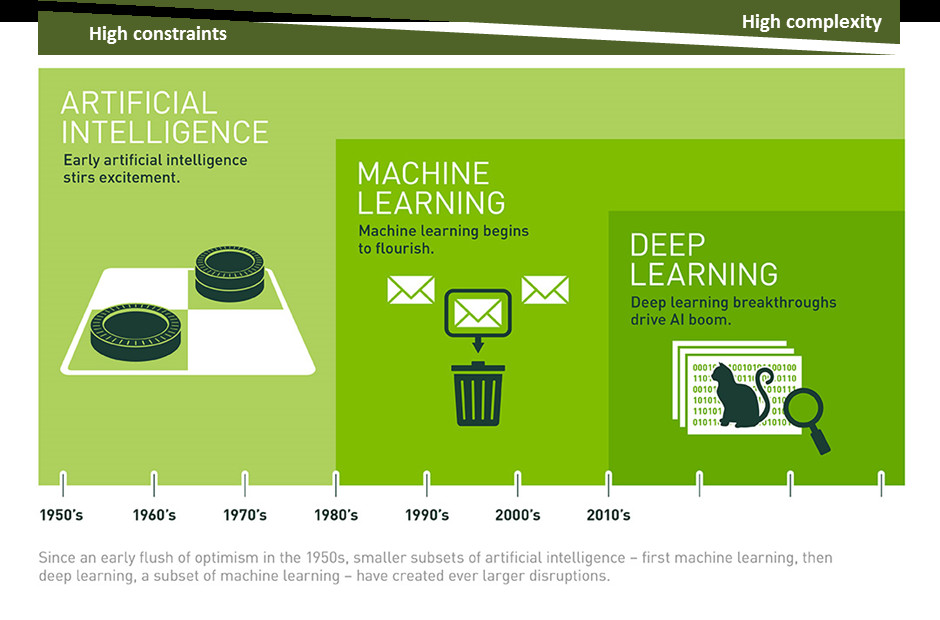 What could artificial intelligence accomplish?
There is a long list of areas where AI can prove useful, no wonder it appears every CEO wants to be AI-ready.
However, I believe we can categorise that potential into the following broad use-cases:

Exhibit 3: The three types of benefits of AI 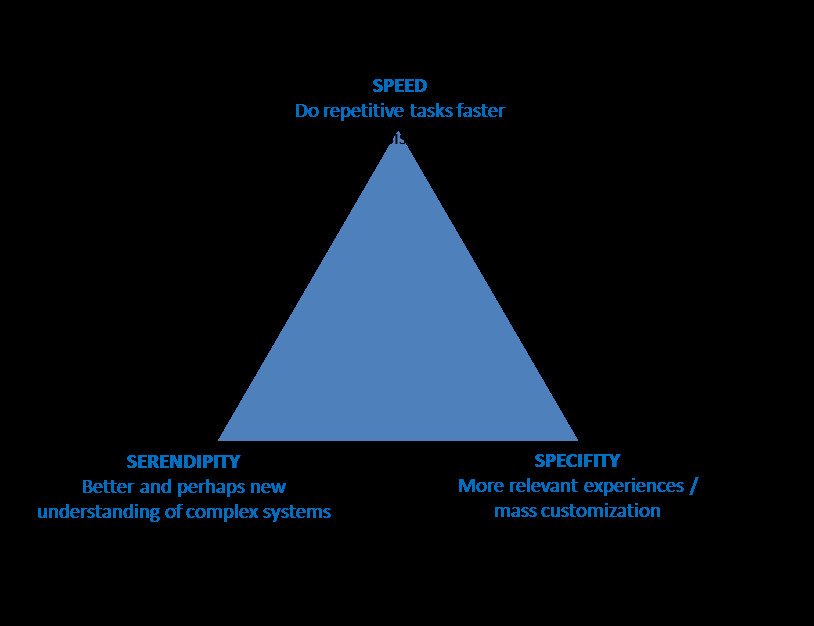 Along with the promise come some risks. These risks have been discussed by various observers.

The final obvious question then is what can we do to make sure that AI is the “best thing ever to happen to humanity” and not the worst?

I remain optimistic and look forward to the coming fourth industrial revolution!
In the long term, from an investment point of view, the resurgence of Artificial intelligence will lead to growing need for computing power, which benefits semiconductor and equipment makers. The productivity benefits resulting from use of AI would get split between the end user (consumers and businesses) and the software vendors.
Disclaimer: This is a discussion of broad technology trends and not investment advice. Any investment decisions made are your own and at your own risk.
All views, opinions, and statements are my own.
[i] Go has 250150 moves and Chess has 3580 moves. To put the scale of these numbers in perspective, the entire universe (as much as we know) has ~1080 atoms
[ii] In particular, a combination of Monte Carlo (game) tree search and deep (convolutional) neural networks for those interested
[iii] Document Search on Sentieo Plotter for Transcripts for “AI or Artificial Intelligence or machine learning or Deep learning”
[iv] There are some extending the AI progress towards Cybernetics – potentially interfacing a human mind with an artificial intelligent brain that one could use for certain kinds of compute / memory / search intensive tasks – but I am not ready to make that leap of faith yet, given our limited understanding of the human brain.
[v] “Google’s AI won the game Go by defying millennia of basic human instinct”, Quartz March 25 2016
[vi] “Robots that take people’s jobs should pay taxes, says Bill Gates”, The Telegraph February 20 2017