This blog first appeared on the equitiesforum.com. here.
There is no denying that the recent cryptocurrency boom resembles the one we saw among dotcom companies in the late 1990s. Celebrities then were taking equity stakes in start-ups in exchange for promoting them, and we are seeing a similar trend today[i].
In the late 1990s, over a period of just four months, the Nasdaq Index almost doubled, while over a similar period this year, the value of bitcoin shot up fivefold.
Exhibit 1: Larger than dotcom boom?

How has this happened?

Andy Kessler[ii] at the Wall Street Journal recently poured cold water on bitcoin’s appreciation by suggesting that the currency is possibly ten times overpriced. While I appreciate the simplicity of the analysis and the quick conclusion that it brings us to, I think it is also worth questioning the underlying assumption. That assumption is that bitcoin’s worth is in its utility as a payment service, like Visa or Mastercard (or ‘software as a service’ as the author calls it). Of course, with that logic, the author’s conclusion of its value around $300 is fair (in fact bitcoin’s not that good as a payment service…it takes 10 minutes to complete a block transaction).
But I disagree that that is all there is to bitcoin. It is not just an application, it is an alternative currency. Its value, thus, is in its usage. The more people use it, the more real and valuable it becomes.
I have written previously on what is special about bitcoin. To recap the most important (soft) feature of bitcoin:

Finally, a currency must have some value associated with it. In the case of normal bank notes, the central bank underwrites that value and users trust the central bank (or the government). Somehow bitcoin has gained trust of its users as a store of value and as more people use it, the more that trust grows. In a way, a currency system is the world’s oldest network effects model – a currency has value, because its users agree there is value in it . From that perspective, bitcoin isn’t a fad anymore; its users are willing to trade one bitcoin for almost USD 735.

If bitcoin is a replacement for fiat currency, then the comparison to a Visa/MasterCard payment system is not relevant. Instead, bitcoin should be compared to a fiat currency, where one could argue, trust is in short supply these days. In contrast, the supply of bitcoins is slowing and will saturate at 21 million coins. Then, the value of a bitcoin is determined by the demand for bitcoin-financed transactions. (In comparison, the monetary base for US dollar has grown about 4x over the past 10 years. See here.) 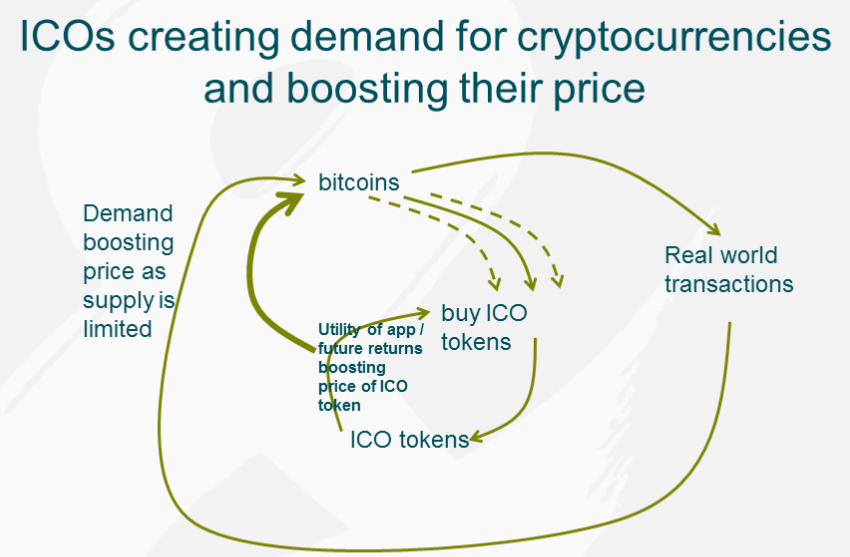 Looking at the rapid rise in the price of cryptocurrencies and the rapid rise in ICO offerings, I would assume causation here. By the end of August 2017, 89 ICO coin sales worth $1.1 billion had been conducted year-to-date, ten times as much as in all of 2016[iii],[iv]. Of this amount, about $500 million was raised in June alone[v]. Participation by “investors” in these ICOs is funded by bitcoin/ether/other cryptocurrencies.
If that is the incremental demand for these currencies, which led to the price rises, it would suggest that the “velocity” of cryptocurrencies is very poor compared to a US dollar (about 25-60 times slower). As such, in a very perverse way, the poor transactional characteristics of cryptocurrencies are most likely[vi] responsible for the rise in their value. By creating a very tight supply of cryptocurrency, even a mere $0.5bn/month demand (for ICO) has been enough to create sky rocketing valuations.
Exhibit 3: Why is bitcoin trading so high?

Note: I have assumed the transactions supported by USD are roughly the size of US GDP ($20T).

Is it different this time?

To be fair, the demand for an ICO (and hence bitcoin/ethereum) should reflect the quality of the businesses they are funding. I am sure there are some gems that will come out of this mania, just like during the internet boom, but unfortunately most businesses appear to be just riding a euphoric wave. Another mind boggling statistic is that ICO funding took over traditional venture capital funding in mid-2017.
The conclusion is a mixed one: While this is unlikely to end well, bitcoin has established itself as an alternative currency.
Disclaimer: This is a discussion of broad technology trends and not investment advice. Any investment decisions made are your own and at your own risk.
All views, opinions, and statements are my own.

[i] https://www.inc.com/business-insider/cryptocurrency-mainstream-bitcoin-ethereum-ico-floyd-mayweather-times-square.html
[ii] I am by no means undermining his analysis or the person. While I agree with the conclusion (bitcoins are overpriced, most likely), I just do not agree with the comparison with payment networks.
[iii] https://siliconangle.com/blog/2017/08/25/initial-coin-offerings-exploding-companies-can-avoid-landmines/
[iv] https://www.bloomberg.com/news/articles/2017-07-25/bankers-ditch-fat-salaries-to-chase-digital-currency-riches
[v] http://uk.businessinsider.com/cryptocurrency-bitcoin-ethereum-ico-mania-going-mainstream-2017-8
[vi] I welcome other explanations but I haven’t come across a better one (yet). This is the best I have (for now) come up with.